Last Sunday, the Toronto Branch of the Ukrainian Canadian Congress held a groundbreaking ceremony for the Holodomor Memorial that will be put at Exhibition Place in about a year from now. Earlier, UCC-Toronto obtained approval of a treed area at Exhibition Place from the City of Toronto as the site for the Memorial.

As Oksana Rewa, past president of UCC Toronto, said during the ceremony, the request for a site had been “put on the back burner and forgotten for years. A third request was made to our current mayor by the steering committee of Dr. Oleh Romanyshyn, Orest Steciw, Dr. Andrew Gregorowich and myself. This request was brought forward from the back burner and acted upon. This is largely due to our forward-moving mayor John Tory – the right man at the right place at the right time. Now is the time for Toronto to move forward with the Memorial.”

Mayor Tory said that ” None of these things could be done by one person alone. Had it not been for the persistence of Oksana Rewa and her committee, this community and the full support of the City Council extending to MPP Yvan Baker, MPs James Maloney, Borys Wrzesnewskyj and others, this would not have happened.” At the end of his speech, Mr. Tory, who has Ukrainian roots in his ethnic background, said in Ukrainian, “За рік часу зустрінемося знову на відкритті Меморіалу.”

The Holodomor Memorial is expected to provide an appropriate public site for annual Holodomor commemorations held on the 4th Saturday of each November. According to UCC Toronto, the proposed concept for the Memorial has the iconic sculpture “Bitter Memories of Childhood” by the Ukrainian artist Petro Drozdovsky in a central position (see the Memorial’s plan below). The sculpture is planned to face toward the Princes’ Gates at Exhibition Place, with a paved dais oriented towards Canada Boulevard. Pathways leading from three different entry points along Strachan Ave. are suggested in order to draw people in to learn more about the Holodomor. 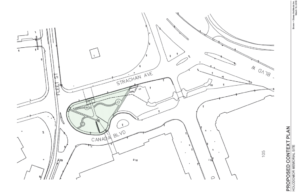 Construction of the Memorial with the budget of around CAD 1.2 million is expected to start in summer/fall 2017. At the moment, according to UCC Toronto, the project’s sponsors are the Temerty Family Foundation, Ihnatowycz Family Foundation, Ochrym family and BCU Foundation. The organizers are calling for public support for the project. Donations may be made online via the Toronto Ukrainian Foundation (http://tufoundation.ca/holodomor/). Cheque donations may also be made.