Trudeau was providing an update amid multiple reports earlier on January 9 that pointed the finger at Iran for the downing of the Boeing 737-800NG, killing all on board including 138 people who were headed to Canada.

“The evidence indicates that the plane was shot down by an Iranian surface-to-air missile. This may well have been unintentional,” Trudeau told a Parliament Hill news conference January 9.

Trudeau said he knows the news will come as a shock to grieving families.

Ukrainian officials have said a missile is on their list of potential causes for the crash. 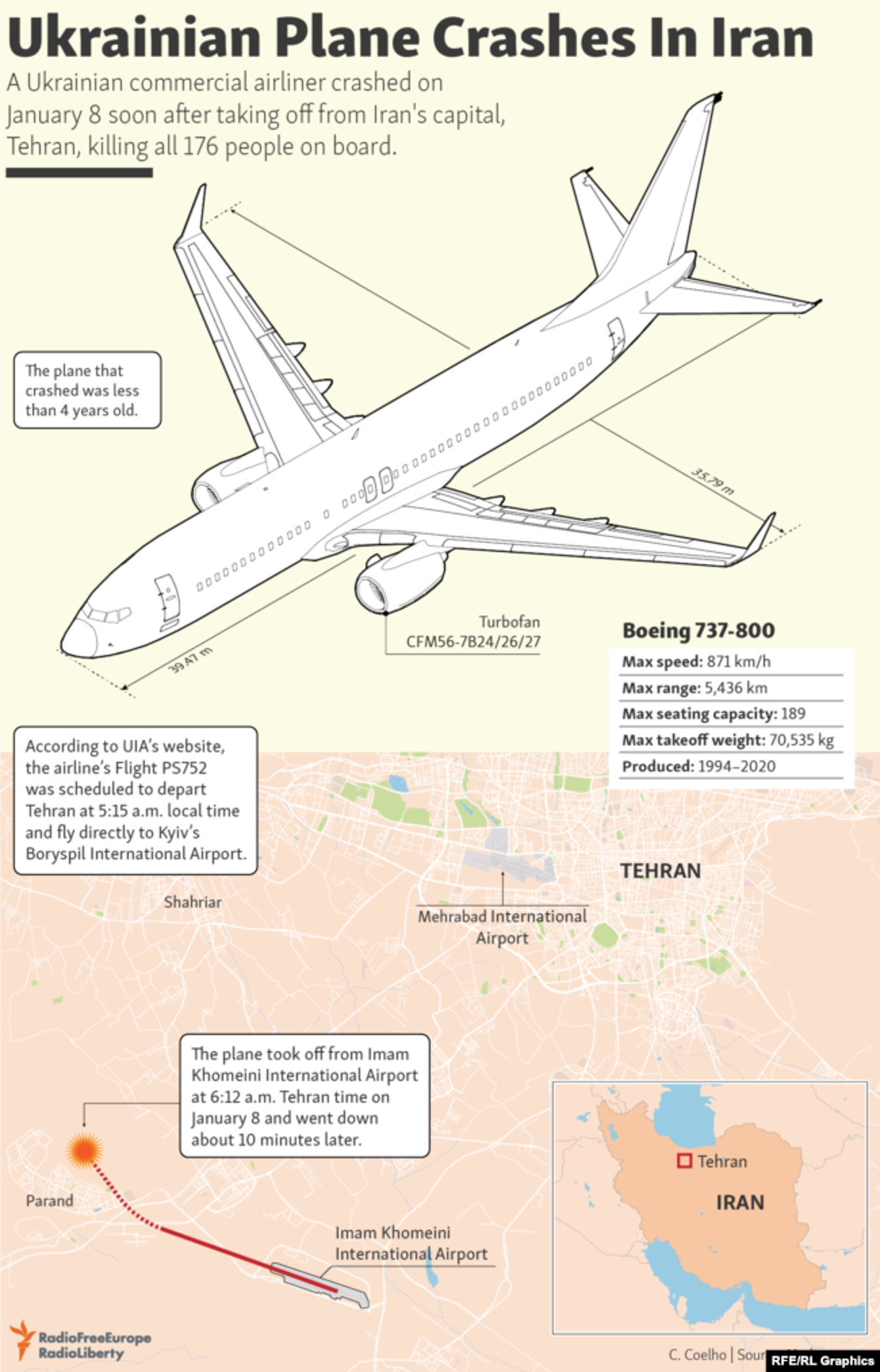 Ukrainian officials said 63 Canadians, 82 Iranians, 10 Swedes, four Afghans, three Germans, and three Britons were on the plane, along with 11 Ukrainians, including nine crew.

The plane crashed minutes after taking off from Tehran’s airport on January 8.

Trudeau repeatedly said there needs to be a complete and thorough investigation to get “a complete picture of what happened.”

He has noted that “Canada is one of a handful of countries with a high degree of expertise when it comes to these sorts of accidents and, therefore, we have much to contribute.”

“I am confident that in our engagement both through our allies and directly, we are going to make sure that we are a substantive contributor to this investigation,” he told reporters.

Trudeau said it was too soon to blame the United States, which triggered a chain of events that led to the crash with its killing of a top Iranian general the previous week. He said there needs to be further investigation.

The crash came after a week of soaring tensions in the Middle East, occurring just hours after Iran launched missile attacks on bases in Iraq where American and allied troops are stationed. Iran said the attacks were retaliation for the American killing of Maj.-Gen. Qassem Suleimani near Baghdad.

“Somebody could have made a mistake on the other side,” Trump said in a Washington news conference, noting the plane was flying in a “pretty rough neighbourhood.”

“Some people say it was mechanical,” Trump added. “I personally don’t think that’s even a question.”

Trudeau said he had no comment on what Trump had said.

Iran’s civil aviation authority is leading the investigation, under international rules for probes of such crashes. The organization said it had invited Canadian investigators from the Transportation Safety Board to join a growing team probing the crash.

Trudeau said Canadian consular officials are headed to Turkey and that Iran would be open to issuing visas so they could be granted access to the country. He said Iran has indicated “an openness” to Canada taking part in an investigation. Canada and Iran broke off diplomatic relations in 2012.

Asked about strained Iran-Canada relations and how they might hamper Canadian efforts to find answers to the disaster, he said Canadian consular officials were en-route to Ankara, Turkey, and that Iranian authorities indicate they are open to providing visas, so that consular assistance can be provided on the ground.

“The majority of victims on that plane were Iranians,” Trudeau said. “That is something that binds us together in our grief.”

Asked whether Canada could apply the Magnitsky Act — which financially targets officials implicated in human rights abuses — against Iran, the prime minister said, “I think it is too early to say what tools could eventually be used depending on the final assessment, the final conclusion.”

“Our focus right now is giving immediate support to the families, working with them to ensure the remains of their loved ones are brought home to Canada, if that is their wishes.”

He said Canada would then, “move forward on the full and complete investigation so that we can then look at next steps in the healing, accountability and justice process.”

Vigils for the victims were held from Halifax to Vancouver.

The collective pain was felt coast-to-coast, as families and friends of the victims banded together to pause and mourn the devastating loss of life, reported CTV News.

Strangers and well-wishers were also in attendance at the dozen or so makeshift candlelight vigils, memorials and outdoor ceremonies in Canada. The country is hope to a vibrant Iranian community, as, in total, There are 300,000 Canadians who list Iranian as ethnicity.

One of the memorials was in Toronto, where Mayor John Tory told mourners that “when one person suffers in Toronto, we all suffer.”

The academic community in Canada also suffered a massive blow, as many of the victims on the flight that crashed shortly after takeoff near Tehran were current and former students – many of whom were returning from visiting family in Iran.

In Ottawa, Prime Minister Justin Trudeau joined hundreds of other mourners in frigid temperatures to lay flowers at a memorial on Parliament Hill.

Almost half of the 63 people from Canada identified by officials so far as having died in the crash were from Alberta, reported CBC News.

Payman Parseyan, a member of the Iranian community in Edmonton, said he knew many passengers who were on board the flight.

“We lost a significant portion of our community,” Parseyan told CBC Radio’s Edmonton AM. “Everybody in Edmonton that’s of Iranian descent will know somebody that was on that flight.”

In Edmonton, at least 10 of the victims had ties to the University of Alberta, the school’s president and vice-chancellor, David Turpin, confirmed January 8.

Ukraine observed a day of national mourning on January 9 as aviation authorities frantically searched for answers after the crash, reported RFE/RL.

President Volodymyr Zelenskyy addressed the nation a day after the crash, saying the state was prepared to provide families who lost relatives in the accident “with all the help they need” and cautioned that the disaster was “not a topic for social media hype, sensationalism or conspiracy theories.”

Ukrainian investigators, 45 of whom arrived in Tehran on January 9, said that they were seeking to search debris at the crash site to help determine the cause, including the possibility that a missile attack or terrorism may be to blame.

“Now our information space is filled with numerous theories and speculations about the tragedy. It is clear that we all want to know the truth as soon as possible. But in such cases, speed can interfere with the truth. We need to wait for at least the preliminary report of the investigation commission,” Zelenskyy said.

“We need patience, endurance and wisdom. This scary story should teach all of us – and every citizen of Ukraine and every world leader – to appreciate human life,” he added.

The crew flying the three-year-old plane, which had its last scheduled maintenance on January 6, initially headed west to leave the airport zone, sent no distress signals, nor did they contact ground control, according to the Iranian aviation authority.

Iranian state media had initially reported that the plane caught fire after crashing, but a video aired by the state broadcaster appeared to show the plane already on fire as it fell from the night sky.

The Boeing 737-800 is a common single-aisle, twin-engine jetliner used for short- to medium-range flights.

Thousands of the planes are used by airlines around the world.

Introduced in the late 1990s, it is an older model than the Boeing 737 MAX, which has been grounded for nearly 10 months following two deadly crashes.