The Shevchenko Foundation has been dedicated to the promotion and development of Ukrainian Canadian culture since 1964. The Kobzar™ Book Award, instituted by the Foundation in 2003 and first awarded in 2006, recognizes outstanding literary works with tangible connections to the Ukrainian Canadian experience. A prize of $25,000 is awarded biennially to an author who has made a significant contribution to the Canadian literary landscape.

The recipient of the 2020 award was Laisha Rosnau, author of Our Familiar Hunger. Rosnau, whose parents named her after Ukrainian national poet, Lesia Ukrainka, provided the colorful example of how Ukrainian female names had been adjusted to Canadian “standards” throughout her family’s history in this country.

Her book of poems explores the lives of women from Ukraine who immigrated to Canada in the early twentieth century and shifts focus to the 21st century with its sex trade and internet-arranged marriage.

Rosnau explained that her grandparents were the initial inspiration. “I imagined the lives of these women, who, like my baba, immigrated to Canada. Why they chose to leave their homeland, how they immigrated, and what they faced once they arrived in Canada. How what immigrants were promised – land, freedom, and opportunity in the New World – wasn’t exactly what they each encountered,” she said.

The winner described getting the award as “the biggest honour” of her literary life. She expressed her gratitude to the Shevchenko Foundation for creating an award that addresses the experiences of a group of Canadians who were historically discriminated against.

“As I sobbed through my acceptance speech, I thought of the strength and especially the joy of my grandparents. How they were delighted – really and truly delighted – by their family, and each of our successes, large and small,” she said. “To think that they started with a dirt-floored, sod-roofed, two-room home on the northern Canadian prairie, and grew their family and legacy from there and that to me accepting such a prestigious award on their behalf nearly a century later. It still makes me tear up.”

Finalist David Demchuk described the submission process for the Award as easy and welcoming. “Everyone involved has been so positive and encouraging,” he said. “This was an exceptional opportunity for me, as it represented recognition and celebration from my home community for issues and themes in my work, which would resonate most with them.”

Demchuk’s original horror novel, The Bone Mother, is set among three villages on the border of Romania and Ukraine in the years leading up to and through World War II. Demchuk explained where he took the material for his book full of mythical creatures from Eastern European folklore: “Some of the stories are similar to those I was told when I was a child; others were derived from stories that I read when I was much older,” he said. “There are aspects of the novel—certain settings and characters—that come from my grandparents’ farm, the town nearby, the surrounding countryside.”

Finalist Sandra Semchuk, a well-known artist and photographer, was also the recipient of the Governor General’s Award in Visual Arts and Media Practices for 2018.

“As a teacher at Emily Carr University for three decades, I had a responsibility to keep learning and growing,” she said. “Writing this book emerged out of that sense of responsibility to educate myself and others.”

The Stories Were Not Told: Canada’s First World War Internment Camps, based on testimonies by internees and their descendants and enriched by photography and cultural theory analysis, has a personal connection for Semchuk. She writes about her father having to assimilate, hide aspects of his identity, and learn how to protect himself from bullying.

An excerpt from her book reads, “Those experiences and the trouble his anger and learned authoritarianism got him into taught him how to resist strategically and gave him a desire to help. When he grew to be a man, he participated in bringing Medicare to Saskatchewan. My father hid his childhood experiences until a near-death experience in later life when he let his boundaries and masks come down. The stories that my father then told provided much of the primary ground for my learning and identity.”

Alex Leslie’s We All Need to Eat is a collection of linked short fiction stories about an intergenerational trauma stemming from a young woman’s, Soma, family Holocaust experience. Soma’s family comes from the village, a Jewish shtetl, in eastern Ukraine. The novella “Who You Start with Is Who You Finish With”, which is at the centre of the book, talks about Soma’s mother Charna’s time during the Holocaust in the shtetl, and sets the stage for the picture of changes and challenges in Soma’s and her family’s lives.

John Paskievich’s The North End Revisited is a testament to the Kobzar™ Book Award’s nature as a multi-genre phenomenon. The book features beautiful photographs taken by Paskievich over the course of more than forty years in one of the most recognizable Ukrainian Canadian urban areas, Winnipeg’s North End. Short, but charming pieces by Stephen Osborne and George Melnyk outlining Paskievich’s work and the interview with the author by Allison Gillmor add to the book’s cultural worth. 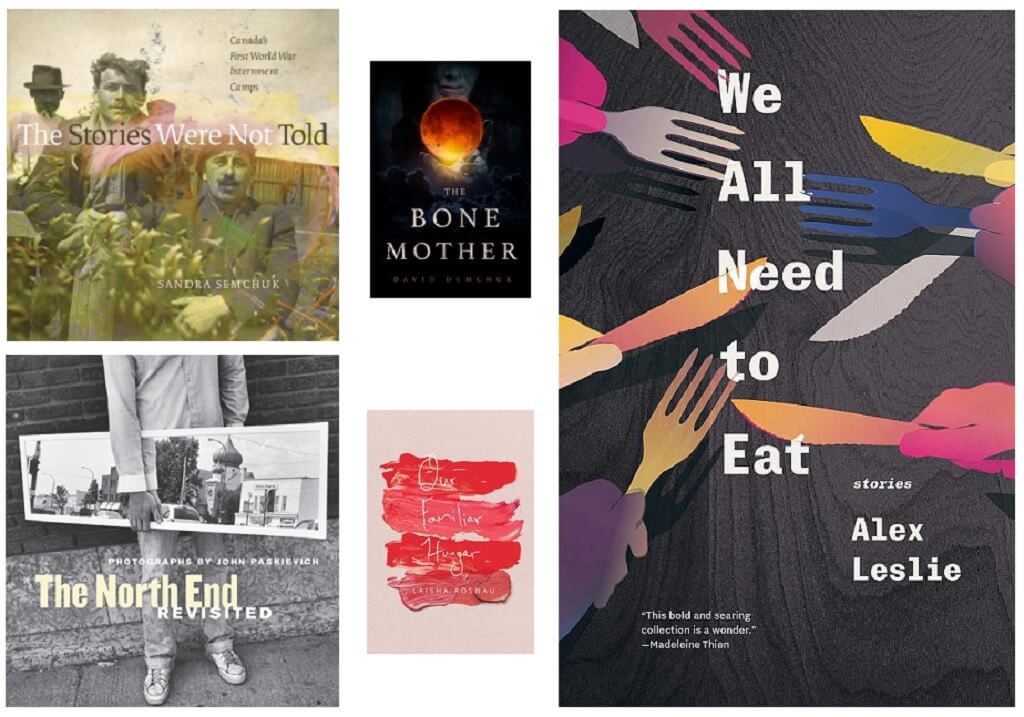 The jury for the award this year consisted of Matt Bowes (General Manager of NeWest Press), Dr. Lindy Ledohowski (teacher, professor, and writer – winner of the 2018 Kobzar™ Book Award) and Nino Ricci (best-selling and award-winning author).

Ledohowski described the selection process as an intense and tremendously rewarding experience. The five shortlisted books were selected out of the total of 21 books submitted. “I lost myself in the stories, the poetry, the images, the scholarship, and the rich textures that each of the nominated books painted that contributes to the wild kaleidoscope of Ukrainian-ness in Canada,” she said.

Bowes explained that they judged the books like in any other literary competition. “We looked for the work that stirred the soul the most and displayed a high degree of literary (and in one case, photographic) merit. It was a really strong field this year,” he said. “I was honoured to be asked to join the jury for this year’s Kobzar Awards.”

When asked to be an Honorary Patron years ago, Ricci was worried about sustaining a prize that had such a narrow ethnic focus. However, in the two years that he has been a juror, he said there was no problem choosing a list of books that would have stood proudly on any prize shortlist.

“One thing this prize has done, perhaps, is establish a sort of lineage to be proud of,” said Ricci. “One that will help give the next generation of writers with some connection to a Ukrainian background permission to keep writing about that connection, in whatever new and hybrid form that might take.”

At the presentation, Oshawa writer Tanya Berezuk was recognized as the winner of the 2020 Shevchenko Foundation Emerging Writers Short Prose Competition for her short story Grafting.